“I thought, this is an opportunity to do something that can make a difference”, Massimo Bottura

In a fraying section of downtown Rio, a pack of the world’s most venerated chefs with the help of a crew of orange-aproned servers (some of the volunteers had traveled from California, Germany and Japan) improvised three times a day meals for 70 homeless people. The Refettorio Gastromotiva -refettorio means dining hall in Italian- is a dining hall for those in need that the Italian chef Massimo Bottura helped to open in the unprepossessing street in Lapa neighborhood of Rio de Janeiro.

Mr. Bottura, whose restaurant in Modena, Osteria Francescana, recently earned the top award from the World’s 50 Best Restaurants, was inspired by the prospect of colossal waste at the Olympic Village for the Rio Games 2016 and, emulating the grandmothers of the world, wanted to take the food that would otherwise be wasted and turned it into amazingly delicious meals.

Culinary luminaries like Alain Ducasse, Virgilio Martínez Véliz and Joan Roca are among the 50 chefs who have signed up for kitchen shifts. Alex Atala, who runs D.O.M., one of Brazil’s top-rated restaurants, helped to prepare last Thursday evening’s menu: Italian-style couscous with sautéed beef and panzanella, a Tuscan bread-and-tomato dish. The ingredients were slightly bruised tomatoes, day-old bread and an assortment of other produce, fresh but visually imperfect, that Olympic caterers had deemed unsuitable for their customers and which might have otherwise been thrown away.

“This is not just a charity; it’s not just about feeding people.” said Mr. Bottura, “This is about social inclusion, teaching people about food waste and giving hope to people who have lost all hope.” The project is not Mr. Bottura’s first venture into culinary philanthropy; during the World Expo2015 in Milan, he turned an abandoned theater into Refettorio Ambrosiano and the center continues to operate.

Nine months before the start of the Games, Mr. Hertz, a Brazilian chef who has spent the past decade training disadvantaged men and women to work as kitchen assistants, persuaded the city’s mayor to provide an empty lot and Mr. Bottura began the difficult task of raising $250,000. Last-minute appeals yielded commercial-grade freezers, ovens and an ice cream maker. The structure of the bright and airy dining space has been create from an industrial shed outfitted with art and plywood furniture, in only 55 days. Despite the generosity, the project ran over budget and created a nearly $190,000 hole that the organizers are trying to fill with donations.

The plans are to keep the venture going even after the Olympics are over, it’s not a pop-up project, on the contrary Refettorio Gastromotiva will operate serving lunch to paying customers and using the proceeds to fund 108 free dinners each night for those in need.

One diner, which he has spent living the past nine years with his wife on the streets of Rio, said the food was the best he’d had in his 40s! More than filling the stomach, Refettorio Gastromotiva had provided much-needed drops of kindness and respect.  The creators of this place hope it will change the way Brazilians, and the entire world, think about hunger, food waste and the nourishing of human dignity. 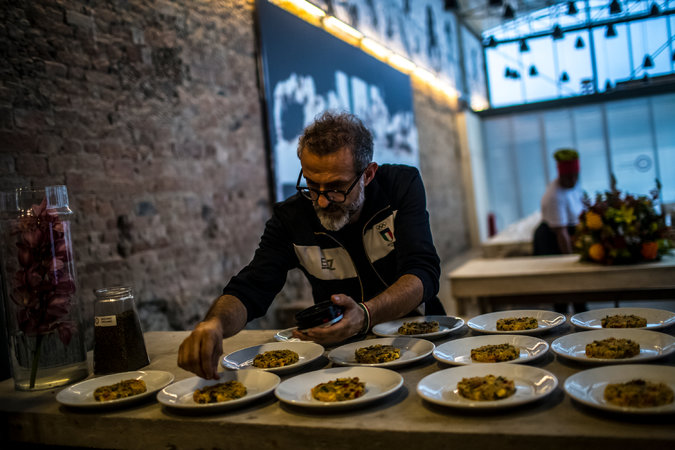 Mr. Bottura sprinkling spices on couscous before it was served to diners at Refettorio Gastromotiva, where ingredients are donated and other well-known chefs have volunteered. Credit Dado Galdieri for The New York Times